The Otter is Gone 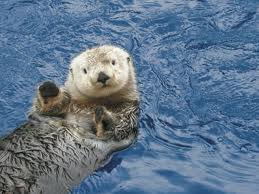 Most people would say I look like a marshmallow. What they don’t know is that the marshmallow goes all the way through. I had to decide whether or not to supplement the otter’s diet by feeding him. I know that this is wrong and makes the animal dependent on humans. That is what I am,human. I went with canned salmon and a solar water lily that would glow in the dark. Otters are nocturnal and the lily would glow at night and hopefully would have provided the little fellow with some amusement.

It was no use. The ants ate the salmon. The slide he was using hasn’t been used for the last days. I have found no body so I hope he has safely moved on.

Red Shoes at the Beach

Really nice. I just saw some river oertts about a week ago while tubing down Putah Creek, really cool.And to the person that mention Emmet Otter, OH MY GOD, YES! I found it on dvd and HAD to purchase it